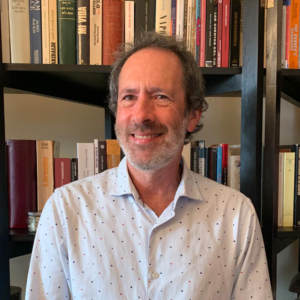 I am 56 years old, I live with my partner and our 6 year old son. I was born in Montevideo, Uruguay, but I am the son and grandson of immigrants. My parents and my four grandparents were born in six different countries, two of which no longer exist, the Austro-Hungarian Empire and the Ottoman Empire. Perhaps thanks to that, today I consider myself a citizen of the world, I speak four languages ​​and I am able to feel at home anywhere and dialogue with people of the most diverse cultures.

When I was 6 years old, my dad sat me in front of a piano and put a tennis racket in my hands. I was neither Arthur Rubinstein nor Guillermo Vilas, although sometimes I regret not having tried the former. At 17, I emigrated to France, my second homeland, seeking the freedom that the military dictatorship in Uruguay had taken away from us, and to study at a business school. I had a bachelor’s degree in Mathematics and Physical Sciences and another in Economics, but I was not an engineer or an accountant, nor do I consider myself an economist despite having a postgraduate degree in economics. I lived in Paris, Lyon, Birmingham, London and Aix-en-Provence, and returned to Uruguay when I was 24 years old. I had graduated from EM Lyon Business School in 1987, and then completed a “Diplôme d’Etudes Supérieures Spécialisées” (D.E.S.S.) in Rural Development Economics at the Université de la Méditerrannée (Aix-Marseille).

I returned to Uruguay in 1988 with the intention of working in rural development project management… and ended up in a market research company! I started in the Uruguayan branch of the Argentine group IPSA, which later became Julio Brenner y Asociados; first as an Assistant Analyst, then in charge of the Retail Audit department, and finally as Technical and Commercial Manager. In 1997, I founded Grupo RADAR, an independent company dedicated to market, social and public opinion research, of which I have been the CEO ever since. Today, I have 31 years of experience in the research industry, 23 of them as a director of my own company.

I have conducted hundreds of studies in all imaginable sectors of activity: from retail auditing to radio and TV audience measurements and to qualitative research; from pre-election polls to studies on the prevalence of drug use; from health service satisfaction surveys to large retail stores location studies.

I have always looked for innovation in the application of new research methodologies and data collection techniques as well as in the inclusion of new technologies. I was a pioneer in Uruguay in the use of panels to measure brand loyalty and for voting intention surveys (1998), in the generalization of the use of telephone surveys (1999), in online surveys, in the monitoring of social networks (2011), in qualitative research through online communities (2016) and in the fusion of machine learning with qualitative research in electoral campaigns (2018).

I have participated in numerous professional associations: I have been a member of ESOMAR since 1997 and I was its Representative in Uruguay from 2002 to 2018; I am a founding member of ADIMU (Association of Market Researchers of Uruguay); founding member and former president from 2015 to 2018 of CEISMU (Chamber of Social and Market Rersearch Companies of Uruguay); CEISMU delegate to ARIA (Americas Research Industry Alliance), the Pan-American alliance of chambers of research companies; and member of WAPOR (World Association for Opinion Research). In 2018 I was elected member of the ESOMAR Council for the 2019-2020 period, and I stand again for the elections, this time also as a candidate for Vice President.

I have been a marketing professor for 28 years and was Associate Professor between 1996 and 2005 at the ORT Uruguay University. I have taught Strategic Marketing and Market Research courses in various technical, undergraduate and graduate degrees, and specialized for several years in the use and application of Markstrat simulation software.

Outside of my work, I am a co-founder and co-organizer of the Punta del Este International Marathon, which had its 12th edition in 2019 with more than 5000 runners from 20 countries. As a runner, I have participated in 26 marathons in 6 countries – including the Atacama Desert in Chile and the End of the World in Tierra del Fuego (Argentina) – as well as hundreds of other street and adventure races and triathlons.

I also consider myself an activist against anti-Semitism and other forms of racism and xenophobia, and for free thought.

Among other things, I also ventured into Stand Up Comedy and it was there where I met who today is my partner and mother of my son.